Before 1985, when it became the Heiva I Tahiti, this famous cultural event was called Tiurai, which is a deformation of the English word “July”.
Actually, the Tiurai was organized for the first time in July 1881 -one year after France had annexed Tahiti- by the colonial administration that was willing to celebrate Bastille Day in a somptuous way. If the Tiurai was quite militar for the colonists, the party that was given for locals was much more festive : games, entertainements, the first singing contest … but absolutly no dance, considered as obscene and abolished in 1820 by the British missionaries.

In 1985 -one year after French Polynesia obtained its internal autonomy- the South Pacific Art Festival was organized in Tahiti and the Tiurai became the Heiva I Tahiti. Moreover, the local government instituted a gathering day on July 29th – called Hiva Vae Vae– which marks the beginning of the Heiva festivities. 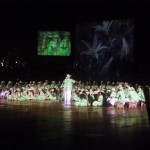 The first himene (singings) created at early 20th century are a sort of mixture of Polynesian traditional polyphonic singings and religious hymns brought by the first British missionaries. The himene tarava, the himene ru’au and the ‘ute are mainhimene types.

If they have a religious aspect when sang in protestant temples, the himene taravaand the himene ru’au take a secular form for the Heiva and help to perpetuate the ma’ohi legends from which the songs’ subjects are issued.

The pre-European Polynesian culture is by definition an oral culture that couldn’t have been transmitted from one generation to the other without the true messengers that were the ‘orero. Actually, these men had to know perfectly all culture fields and moreover they had to know how to transmit their knowledge. True learned men, they also had to be orators, storytellers and even actors and singers. Moreover, they had to have a strong and untiring voice, as well as an infallible memory.

Only a long education could give a good ‘orero : first of all, the student was tattooed -sometimes on his whole body- what constituted a true “formatting rite”, then he was “filled with knowledge” like an empty object. Thus, when his formation was over, the ‘orero had to perfectly mastel the three main points of his future function : themana, a vital power for knowledge ; the pa’ari, knowledge itself and the tapu, a sort of professional ethic of the‘orero. 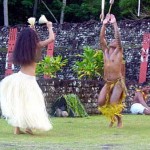 Abolished in 1820 by the British puritan missionaries, the Polynesian dance made a timid come back at early 20th century but kept closed in restraint during the 50 following years. The costumes only allowed to see the face, the feet and the hands ; the gestures and attitudes were fixed… A renewal only appeared in the second half of the 20th century, but unfortunately, cultural losses were huge.

Opening and codification were the two words that best summarized the evolution of the Polynesian dance since the 1950′. Step by step, the pressure exercised by strong personalities like Madeleine MOUA allowed to raise interdictions and to attend a renewal of this art, deprived of any expression for long. A wave of steps and gestures seeking and codification as executed before the Europeans arrival started, but it was not easy.

Since 1998, Heiva contests allow to conciliate these two elements promoting both creativity and respect of tradition. Tradition is paid tribute thanks to the Madeleine Moua Tradition Prize or to the Claire Leverd Prizewhich rewards the group that best defended the original traditions. But creation is also rewarded through theGilles Hollande free creation Great Prize. Gilles Hollande was actually a great dancer and choreographer of the 1990′ that revolutionized Polynesian dance and made it famous all around the world.

Four type of dances are presented during the Heiva contest : the ote’a, the aparima, the hivinau and thepa’o’a. 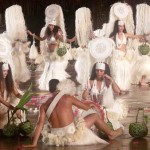 The costumes are a significant part of the show that is given since they are a truetrademark for some groups and also receive a mark during the Heiva. They also permit to carry on a strong cultural tradition, guarantor of the handicraft and of the local identity survival. 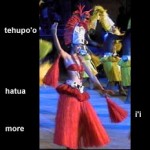 The costume is also different from one dance to another : dancers will wear a pareu or a cloth dress for the aparima, and a costume made of vegetals for the ote’a.
Click the small picture for more details.

Finally, there are a lot of rules managing the Heiva contest which define true conventions : exclusive use of vegetal matters, hand-crafted costumes, use of the blue color only on cloth, jewelry forbidden…

For the local traditional orchestras, Heiva best orchestra contest has always been the end of one hard work year so as a true rostrum where one can demonstrate his talent : musicians qualities, rapidity of execution, melodies originality or on the contrary tribute to old melodies, clothes… everything is juged.

Since 1998, the contest is divided into two parts : a compulsory program, and a free program. The compulsory program could be summarize like that : five musicians, five different instruments and five pieces that must be played with the most clearness and rigor as possible. As for the free program, it privilegiates original creation but also emphasizes on pieces difficulty, instruments and tones diversity. 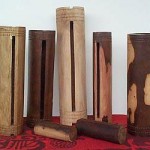 Though imported from the Cook islands, the to’ere -that exists in three different sizes- has become the polynesian percussion par excellence, perfectly integrating itself to pre-existing orchestras. Its fabrication in rosewood ortamanu demands a great agility and a fine ear from the sculptor in order to obtain the more just and large sounds scale. Actually, the instrumentist will obtain the desired sounds only while changing the hitting point.

The tari parau is a sort of polynesian bass drum for it is hit with a felt drumstick and produces bass and dull tones. It can also be hit with hands to give little offbeats or to atenuate vibrations.

The ‘ihara is a bamboo split in thin strips hit with two drumsticks. 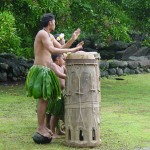 The pahu is the polynesian instrument that the more looks like the world others percussions, as the African djembe for instance. It can be noticed that as in the rest of the world, this drum has had numerous uses : to encourage warriors during a fight, to accompany the marae ceremonies, to give rythm to Heiva evenings…

The vivo is a three-holes-bamboo flute in which the instrumentist blows with its nose. Though it can only play few notes, the vivo produces wonderful sounds thanks to the harmonization efforts of the musicians while playing in groups.