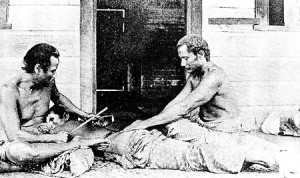 As the practice of tattooing has existed in the Polynesian triangle for hundreds of years, it was probably known by the first migrants before they settled in French Polynesian islands. The words “tattoo”, “tatoo” and “tattow” come from theTahitian word tatau -that can be translated by “hitting repeatedly”- was used to describe the practice of writing indelible marks on human skin.

This practice had been ignored by Europeans until Cook discovered it during his trip to the Marquesas islands. He wrote in his diary “they print signs on people’s body and call this tattow” (Voyages of Captain Cook by Banks). Omain, the first Tahitian to embark to Europe, became rapidly famous partly because of his tattoos.

Later, many navigators stopping by the Polynesian islands got tattooed, thus strengthening the tradition of tattooing among sailors. Moreover, some shipwrecked men returned from the South Pacific with their bodies covered by tattoos : they received the nickname of “beachcombers”.

After their arrival in Polynesian islands, the Missionaries converted the locals to Christianity and the art of tatooing was completely forbidden. 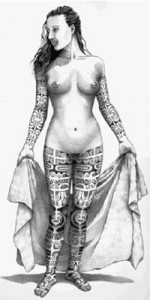 The tattoo art, always alive in the history of humanity, reached a particularly developed status in Polynesia where it is called “language of the Ancients” by Tapu BONNET –the oldest tattoo master of the region. Due to its geographical isolation and its resistance to the occidental culture, tattoos from the Marquesas islands constitute the most accomplished style in the whole Polynesian triangle.

According to mythology, the two sons of the God Ta’aroa -Mata Arhu and Tu Ra’i po’- found this art decorative and decided to teach it to humans. As there is no writing in the Polynesian culture, Polynesians used this art full of distinctive signs to express their identity and personality. Tattooing was used to identify your status in a hierarchical society : sex, social status and rank as well as family clans differentiation.

Tattoo was not only used for social purposes but it was also considered as a good protection against evil spirits. It was also used in rites of passage to the adult life for teenagers -around 12 years. During this feast, the young men would show their tattoos as a proof of the accomplishment of their learning, prior to be fully admitted in the adults clan and recognized by the community. This step was compulsory to enter the world of men. 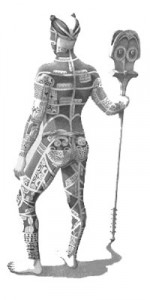 This art was ruled by strict laws and it reached the entire Polynesian society over the 5 archipelagoes. It couldonly be practiced by tattoo masters, a highly respected profession that required a long period of learning and training.

Originally, signs were made using a sharp burin and the indelible ink was made out of wood ashes obtained from burned coconut almonds mixed with coconut oil or warm water. The tools were made out of bones or animal teeth (sometimes shark teeth), seashells or turtle shells. They were used with a small mallet to apply little hits on the skin.
Dr. ROLLIN described the art of tattooing the following way: “the patient was immobilized most frequently in a sort of vise composed of two trunks of banana trees between which he was attached and held tight. The tattooer, accompanied by his assistants, sang a sort of chant of the occasion syncopated to the rhythm of the tapping of his little mallet. Each drop of blood was rapidly wiped up with a scrap of tapa, so that none be allowed to fall to the ground”

Tattoo and the Marquesas Islands 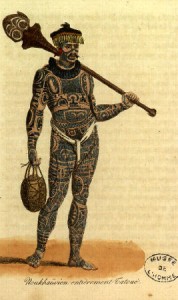 The art of tattooing has always been deeply linked to the Marquesian culture and traditions. Men bodies could be entirely tattooed with geometrical signs, including the face, and even the tongue. On the other hand, women only got the shoulders, the inferior region of the back, the hands and the border of their lips tattooed.

The exceptional variety of designs are usually related to nature like animals (turtles, sharks, lizards, or tropical birds), plants (bamboo, cane sugar, coconut palm, pandanus leaves…) or sometimes to legends or activities like fishing. The most widely spread figure remains the tiki whose eyes, nose or hands could be used separately to obtain a more complicated and unique result. 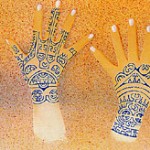 The study of the designs on Marquesian bodies allowed us to understand how someone was positioned in the society : a tattooed face revealed to which tribe he belonged ; a lizard on the face was a proof of a very high social rank.

Women over 12 years old had to get their right hand tattooed before they could prepare a meal and consume it with the rest of the community. 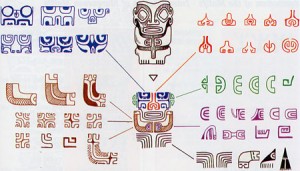 Tattoo in the Society Islands

In the 18th century, Wallis had noticed that it was a “universal custom among men and women to get their buttocks and the back of their thighs painted with thin black lines representing different figures”. In the Society Islands, the body was tattooed with Z-shapes and the face was never touched. Banks wrote : “Men and women usually carry a Z-mark on each articulation of their toes and fingers and sometimes around their feet. They also have signs representing squares, circles, human faces, birds, dogs painted on their arms and legs. (…) they usually don’t get their face painted and we saw only one example of the contrary.” Banks had also noticed that the most commonly tattooed part of the body was the buttock.

The tattoo practice disappeared more rapidly in Tahiti than in the other Polynesian islands.

Tattoo in the other archipelagos 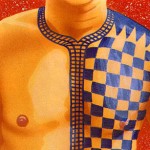 Tattooing was practiced only in the eastern part of the Tuamotu archipelago. Women’s hands, shoulders, arms, legs and buttocks carried geometrical signswhereas men’s bodies and faces were covered by irregular signs ; triangles and checked designs were reserved to courageous warriors.

In the Australs, tattooing is similar to what is found in Society Islands, designs being mostly parallel lines similar to the tapas they were producing. In the Gambier, tattoo was compulsory for men but rarely practiced on women. Finally, people from Mangareva carried a very special design : a circle printed just under the armpits and in the back. Every year, the circle was darkened to finally leave a blank cross in the inside.

The Art of tatooing today 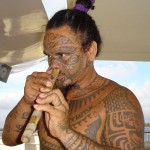 After it was forbidden by missioners, the art of tattooing completely disappeared and it only came back in the 80’s thanks to the notes and sketches of over 400 drawings made by missionary Karl Von Steinen. Indeed, it had been totally forgotten !

Today, you will find many places to get tattooed in French Polynesia. The most popular and appreciated signs are the tiki, the turtle, the lizard (gecko), the ray as well as a lot of specific Marquesas designs. The firstinternational festival of tattooing was organized in April 2000 on the “sacred island” of Raiatea. It gathered 50 tattoo masters from all over the world and encountered a big success.

If you want to get a tattoo during your vacation in our islands, check our list of tattooists 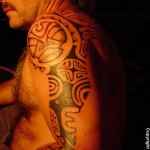 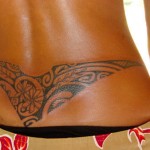 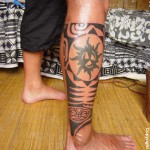 and special thanks to Polynesian Tattoo – Past & Present, by Gotz. 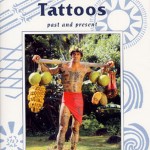