The Tahitian Society before navigators 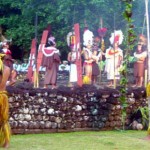 Before the Europeans’ arrival, the Polynesian territory was divided into tribes ruled by powerful families whose power was inherited at the origin by family connections with gods.
Since no chief was able to control all tribes, this system of check and balances guaranteed a quite peaceful life. 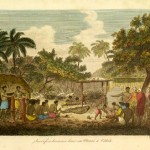 Pre European Polynesian religion was based on myths and legends transmitted from one generation to an other thanks to priests and ‘orero -great learned men- during big ceremonies organized in marae. These myths and legends aimed to demonstrate the existing link between gods and ari’i in order to legitimate their power. Besides, they aimed at improving the image of the aristocracy and at promoting its representatives to heroes.

As a consequence, ari’i were very demanding as for ceremonies (birth, wedding, funeral, king sacrament…). Actually, if a ceremony went off normally, it was the insurance of happy gods and the continuity of ari’i‘s power. Human sacrifices were even made to obtain prophecies and protection. As for offertories and prayers, they aimed at establishing a contact with gods.

To have access to the sacred places that were marae, the participants -priests, ari’iand great warriors- had first to isolate themselves in order to be purified. During all that period, the whole society had to respect tabu -interdictions that were like laws. All in all, Polynesian religion allowed to structure and form society into a hierarchy as well as to create social norms. 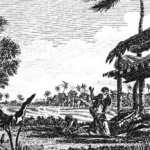 Although death and the hereafter wasn’t equally regarded in all Polynesia, there are similarities from one archipelago to an other. 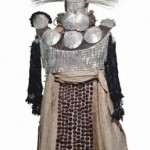 Thus, death was conceived as a definitive partition between body (tino) and soul(iho) that were transformed into a corps (tupapa’u) and a spirit (varua). Elsewhere, as well as the Egyptians did, ancient Polynesians thought that a well prepared mortuary ceremony guaranteed an easy trip to the next world. On the contrary, if embalming was badly made or if the ceremony badly went off, the dead spirit could haunt inhabitants through the “mourner” body, a priest who was -among others- in charged of looking after the corps. During all the funeral period -that could last for several months for the highest dignitaries- the dead spirit could even deliver a last message or piece of advice, then he freed the livings of its torments.

Most of the world mythological conceptions explain that plants were created before human, but on the contrary the Polynesian myths tell how plants, fruits and vegetables came from human bodies. That is the case for ‘uru for instance : its trunk come from the body of a men, branches and roots from its limbs, leafs from its hands, fruit from his head and the almond from its tong.

As a consequence humans and plants keep having a peculiar link : created by humans, plants kept the shape of the organ from which they were issued and for that reason they are the best remedy to cure it. Moreover, a disease is considered as an alien fluid which introduces itself in the body of a person that broke a tabu -an interdiction. This negative fluid is source of an imbalance that the tahu’a -a priest- will have to cure. Actually, Polynesian traditional medicine considers both body and soul have to be freed from the disease.

Preserving food by fermentation
Fermentation allowed Polynesians to constitute food stocks during periods of abundance. Thus large quantities of fruits and vegetables were stocked in holes dug into the ground. These stocks could permit one family to eat during one whole year. Moreover, fermentation permitted to destroy poisonous substances that made some vegetables unfit for human consumption.

Stone fishing
This method of communal fishing used in lagoons allowed to capture easily a lot of fish and as a consequence was only organised for great events.The name of this method has its origin in the fact that several teams of fishermen are charged to frighten fish by hitting water with a stone tied up to a cord.

Afraid by this disturbance, fishes loose their landmarks and are easily driven to the beach. They engulf in the trap set by inhabitants -a sort of giant net constituted with coconut tree palms. Then the net is pulled towards the beach while fishermen catch the fish with harpoons.

Polynesian oven
Braising food with Polynesian oven is a method of cooking that demand a long preparation.
The eve of the dinner, a hole is dug into the ground. Its size is always proportional to the quantity of food that will be cooked. A fire is lit in order to heat white-hot the volcanic stones or coral pieces that will keep the oven warm during all cooking time. The morning after, mats are put down in the bottom to protect food from fire. Then the different ingredients are set down in layers : fruits and vegetables (fei, ‘uru, taro, manioc, yam, sweet potatoe…), entire piglet -formerly reserved to the elite – and finally the most fragile food like poe and fishes, protected with banana leafs. 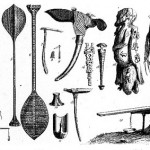 To make their tools before the Europeans had introduced metal, the ancient Polynesians used all vegetal, animal and mineral materials that they could find on place.Thus they used volcanic stones, coral, shell, bones or wood, coconut husk and animal skins.
However, volcanic stones was mostly used since they are both hard and pretty light. We can notice that the inhabitants of atolls must have bartered with the inhabitants of the high volcanic islands since this type of stones could not be found on atolls. Actually, traces of old quarries and galleries are to be found today in high volcanic islands, like the Papeno’o valley gallery in Tahiti that reaches 4 m high in some places and 9 m depth.

Two main types of canoes existed in Polynesia : massive canoes -often double- used for great migrations or war that could reach 30 m long and transport up to 300 people ; and thin canoes, more easy to control and fit with an outrigger for fishing. 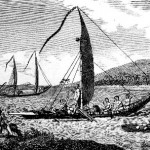 For longer voyages, canoes needed a best means of propulsion since paddles was not sufficient . As a consequence they could be enriched with a big paddle that was used as a rudder, and with triangular sails that was made of weaved pandanus leafs.

Canoes could be built of two different ways according to the archipelagos.
In high volcanic islands -where big trees grew- canoes were carved in one piece in a full trunk, however in atolls -where trees grew with difficulty- the wood of little trees was used to make planks that were “sewed” to each other. Holes were made on planks sides, coconut husk cords were threaded into it and finally a mixture of breadfruit tree sap and coconut husk fibre was used to caulk the canoe. 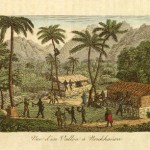 The construction of residential buildings was firmly linked with religion : to be sure of the result, spirits had to be consulted or at least informed of the future works -for the cutting down of an old tree for instance. For the construction of more sacred buildings, offertories and prayers were even recommended. 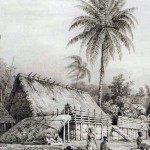 In whole Polynesia, most houses were built on an isolating stone platform and every building had its specific function : detached houses, house for gods, canoes warehouse… Frame was often made withcoconut tree trunks that are light and do not demand previous preparation (barking, stripping…). As for roofs, they were made of coconut leafs (niau) and pandanus (fara) weaved to obtain true vegetal tiles. Furniture and other personal objects were quite limited : wood and stone head restraints, wood dish, lobster pot, baskets, music or tattooing instruments…

Old Polynesians did not know either metal or pottery so that they created very developed weaving methods which permitted them to answer all their demands from big and resisting objects to finely weaved objects.

Materials were exclusively of vegetal origin : coconut tree, pandanus, reed and bamboo that permitted to make tiles for fare roofs, sails for canoes, mats, ornaments, hats, baskets, fans and fly swatters. This activity was mainly let to women who became true experts and artists, notably in the Austral islands where weaving reaches a great delicacy.

Before the arrival of the missionaries at last 18th century , Polynesians were lightly dressed -whatever their social rank. Only the quality of the work and of the materials used was different. Actually, all clothes were made from leaves weaved together in order to obtain a sort of skirt, or from transformed plants like tapa.

The most spread clothes were the maro -a simple apron- and the ‘ahu -a big piece of tapa in which men draped themselves and that women tied to make a dress : actually, no clothe was sewed.
As for the famous pareu, it only appeared when the first Europeans arrived in Polynesia. Pareu was rapidly adopted by Polynesians that arranged this piece of cloth with their manner, creating numerous ways to wear it.

The simplicity of the clothes worn by Polynesians in everyday life was without comparison with what they sported for big ceremonies. Thus Polynesians pushed the art of ornaments with its paroxysm : headdress, diadems, earrings… in mother-of-pearl, bones, teeth, coral, shells, plants, coconut husk, hair and feathers ! 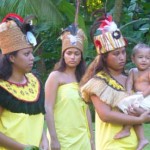 This great diversity of materials as well as imagination and talent of craftsmen allowed to create wonderful ornaments symbol of power and membership to a social class. Thus a belt made of red feathers was a royal symbol given to the king for its enthroning. Besides there are numerous types ofheaddresses with different form and size : from the more simple made of a band of tapa on which a mother-of-pearl is sewed ; to the more impressive like the ta’avaha -an enourmous headdress made of 500 rooster feathers.
Finally, the necklaces for the common run of people were made of coconut husk which fibres were worked and weaved in order to obtain a support on which were hang mother-of-pearls or animal teeth. As for the more worked necklaces, human hair were weaved in cords.