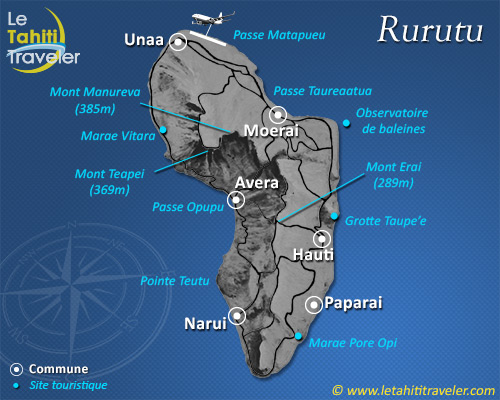 Rurutu, anciently name is “Eteroa”, is located at 572 kilometres  southwest of Tahiti and it has a surface of 32 km2. Its geological structure is unique in Polynesia as this island does not feature a lagoon but it is surrounded by steep cliffs and includes several chalky caves with stalactites and stalagmites made by erosion. This is why it is sometimes called the “Troglodyte island”. Those caves constitutes one of the major points of interest, the most famous ones being Anaaeo and Vitaria whose access located near Mount Rairiri is more difficult. On the maraes of Pareopi and Vitaria, that were still used until recently by the Royal family of Rurutu, you will find some vertical stones pointing to the sky – typical of Australs maraes.

During the “Tere” ritual held in January, the entire population makes some kind of historic pilgrim that consists of a tour around the island with stops at maraes and other ancestral legend spots. This festival ends with a stone lifting competition that gather male and female athletes (the strongest ones lift up stones that can reach up to 150 kilos).

Climbing the mounts Manureva (398 meters), Taatioa (389 meters) and Teapei (369 meters) will take you to beautiful panoramas, especially over the Tetuanui plateau – a large orchard of avocados, oranges, vanilla, taro and coffee plants are still cultivated like in the ancient times.

Because of the lack of lagoon, few beaches are available in Rurutu. Though some exceptions exist with the white sand beaches of Naairoa, Avera and Arei. Moreover, Rurutu offers to divers a large panel of sharks and whales coming with their babies in the Polynesian waters between July and October.

Like Tubuai, the first inhabitants came around 900 AD. The archaeological excavations done at the village of Vitaria have uncovered a village of some 70 home sites organized in areas around the Marae Taaoroa (Ari’i).

Rurutu was “discovered” in 1769 by James Cook and at that time, the population was around 3,000 persons. But Christianisation (1821), diseases, tribal wars and migrations of people during the 20th century decreased it to 2,103 (1996 census) persons spread between 3 villages : Moerai, Avera and Hauti with its colourful coral block homes.

France established its protectorate over Rurutu in 1889, then annexed it in 1900.

The village of Moerai, headquarters for the commune, is located on the north coast of the island, facing the unique pass of the island. It features a post office, police, schools and an infirmary.

Rurutu’s economic activities include production of woven objects such as hats and baskets, and thanks to fertile soils, intensive agriculture (taro, coffee, vanilla and bananas).