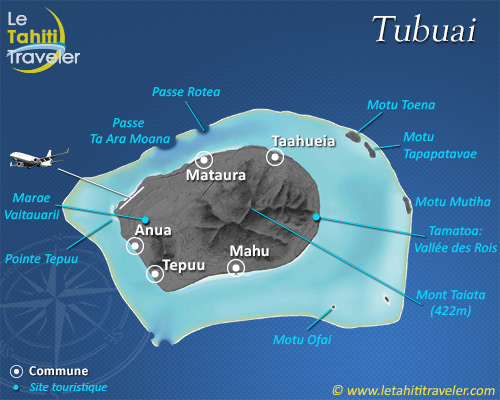 Tubuai is located 640 km south of Tahiti. With its 2,049 inhabitants (last 1996 census) spread on 45 km2, it is the most crowded of the Australs Islands and the administrative and economical center of the archipelago.

Oval-shape  volcanic island featuring a particular relief constituted by its 2 volcanic chains among which Mount Taita is 422 meters at its highest point. Surrounded by a turquoise lagoon of approximately 3,5 km width and many motus (islets). It offers several plateau suitable for fruits and vegetables agriculture among which taro, potatoes and coffee that are sent to Papeete market.

Located on the north coast, Mataura (1,000 persons) is the main village and it concentrates shops, city hall, schools, hospitals, police and the airport.

Tubuai, with its rather flat landscapes, features many great land excursions with a road crossing the island from Mataura to Mahu and numerous tracks accessible either by foot, by bicycle, or by 4×4 vehicles. Also take a little time to admire the wonderful panoramas you will discover on the island circle road, the islets located on the east coast and the white sand beaches facing the 2 passes (Te Ara Moana & Reita). You can make a stop on the northeast coast at the site of the reconstructed Fort George, and an another stop near the village of Mahu in the south at the Saint Helen Hermitage beside the memorial tomb of a President of the Territorial Assembly.

Tubuai and Rurutu would habe been settled from the Society Islands, archeological researches having dated the first settlements around 900 AD. The architecture of the “maraes” offers a particular aspect illustrated by the “ahu” – a simple platform where the dead were buried. At the end of the 18th century, James Morrison, second mate aboard the Bounty, noted on his diary many similarities with the Society Islands civilization.

Captain Cook was the first European to explore Tubuai in 1777 during his last voyage to Tahiti. Twelve years later (June – September 1789), Fletcher Christian and his mutineers from the Bounty found refuge on the island and built Fort George on the northeast coast. However, they were forced to leave the island after a series of intense fights with the autochthones.

Tubuai was converted to Protestantism in 1822. The Mormon arrived in 1844, followed by the Catholics in 1908.

France annexed Tubuai in 1881 after Pomare had already done so in 1842.