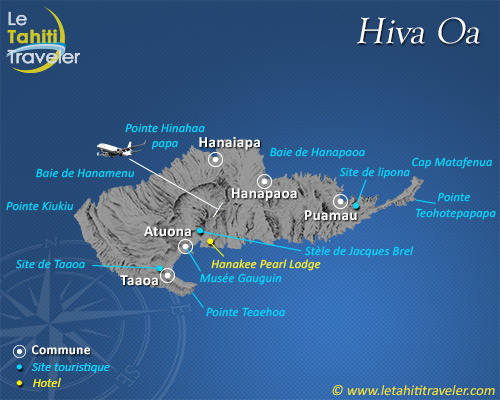 The largest of the southern islands, Hiva Oa, the master pillar or finial post of the “Great House” -which represents the Marquesan archipelago in the local mythology- has always been the rival of Nuku Hiva. The island is shaped like a seahorse and has a mountain range running southwest to northeast whose main peaks, Mt Temetiu and Mt Feani form a real wall around Atuona. 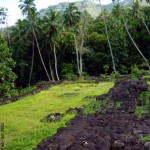 Atuona, a peaceful little port at the head of the Taaoa bay, also known as Traitors Bay, has emerged from obscurity due to having had the privilege of being the lastresting place of Paul Gauguin and of the singer Jacques Brel. The tombs of these famous personalities are on the side of the Calvary cemetery looking out across the bay and are places of great pilgrimage. In the village, the Gauguin Museumdisplays items related to the painter’s stay there at the beginning of the century and has copies of his works. 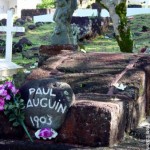 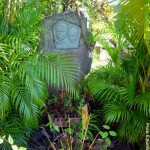 The “House of Pleasure” where Gauguin lived has been rebuilt with copies of the carved wood panels and the lintel bearing this inscription. In the outskirts of Atuona, heading towards the airport on a site dominating Tahauku bay and Hanakee Islet a memorial to the singer Jacques Brel has been erected. Near the airstrip, Brel’s little Beechcraft Bonanza airplane, baptized “Jojo”, is on display. Also, very close to Tahauku, a track leads to Tehueko a petroglyph site whose carvings bear a strange resemblance to the ones on Easter.