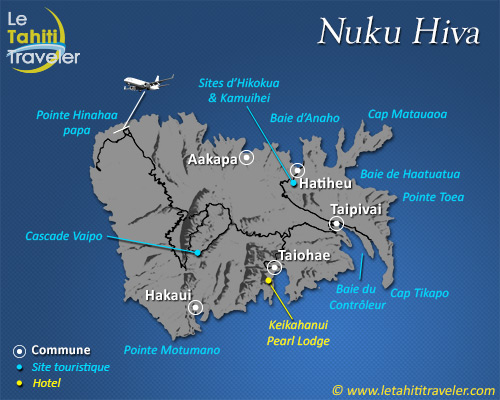 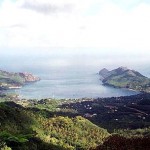 The biggest of the Marquesan islands, the “roof beam” of the “Great House” -which represents the Marquesan archipelago in the local mythology- has a mountain range dominated by Mt Tekao (1,224 meters) that runs the length of the desert lands in the west where the airport has been built.The center consists of the Toovii plateau (800 meters) which extends out as a large agricultural region in pasture, fields and forests. The highly indented coastline features bays, capes, rocky points and cliffs with villages at the heads of the bays.

Taiohae, under the imposing shadow of Mt Muake (864 meters), the administrative capital and seat of the archbishopric, is in a sheltered harbor location guarded by two rocky islets, the “Sentries” of the East and the West. 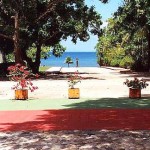 The interesting places to see are in the eastern side of the village : the Piki Vehine or Temeheapaepae, adorned by a number of giant tiki that were made for a recent Marquesas festival, and thecathedral of Notre-Dame of Marquesas built with different shaped and colored stones from the six Marquesan islands. Inside, you can also admire the fine woodcarvings as an example of Marquesan religious art.

In the other part of the valley, a local artist has carved in wood, a memorial dedicated to the adventurer and novelist Herman Melville.