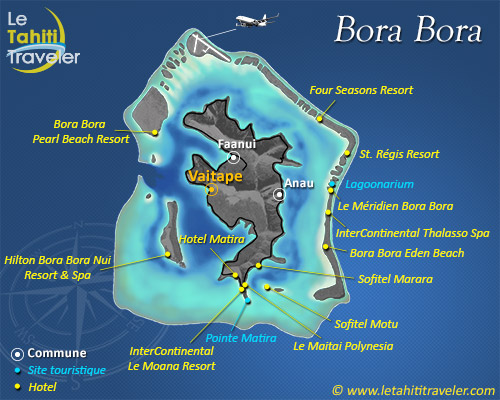 Superlatives are missing to describe the beauty of Bora Bora, the “Pearl of the Pacific”. The most famous of the Leeward Islands occupies a surface of 38 km² and is located 280 km north-west of Tahiti, just under one hour away by plane from Papeete. Your arrival at Bora Bora will definitely leave you with one of the nicest souvenirs of your trip : the airport being located on an islet, your flight will be followed by a short boat ride over the lagoon along the numerous islets. 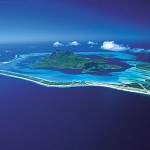 Bora Bora (or “Pora Pora”) emerged from the waters 3 millions years ago. Like all the other Polynesian islands, this volcanic island slowly sinking in the ocean. It currently presents particular geological characteristics ranging in between a high island and an atoll status.

Its unforgettable turquoise lagoon -where a multi-color aquatic fauna (sting & manta rays, sharks, tropical fishes …) can be observed by outrigger canoe, boat or diving explorations- is born from the slow decline of its main volcano – Mount Otemanu (727 m)- doubled by the legendary Mount Pahia (626 m). The coral reef includes a string of islets (motu One, motu Mute, motu Piti Aau …) and gorgeous white sand beaches surrounding the main island. The unique pass of Teavanui between the ocean and the lagoon faces the main village of Vaitape located on the western coast of the island.The west coast presents 2 bays : Faanui and Poofai. 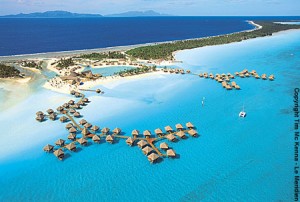 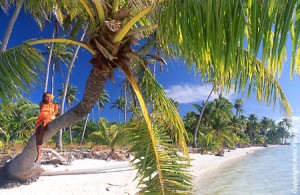 The first signs of human life on the island of Bora Bora (formerly called Vavau -which may indicate that it was colonized by inhabitants of a Tonga island carrying the same name) are dated 900 BC, just after the populating of the island of Raiatea. According to the legend, Bora Bora means “first born” because it was the first island to emerge from the waters after the creation of Raiatea. In the ancient times, it was actually called “Mai Te Pora” which literally signifies “created by the Gods”. Approximately 40 maraes can be found in Bora Bora – the most significant one being the marae Fare Opu which is decorated with petroglyphs.

Bora Bora was first “discovered” by the navigator Roogeveen in 1722 then by Cook in 1796. It was converted to Protestantism in 1818. Famous for its warriors, the island resisted a long time to colonization until it was finally conquered by France in 1888. However, it kept its traditional lifestyle until the end of the 19th century. All this changed brutally on January 27, 1942, when Americans used the island as a supply base for the allied ships crossing the Pacific in an operation baptized Bobcat(after the attack of Pearl Harbour in December 1941). 5,000 GI’s disembarked with heavy military equipments and built a 2,000-meter runway on motu Mute. This runway was used for international flights until 1961 when Tahiti Faa’a international airport was finally built. 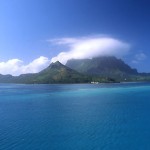 The worldwide reputation of Bora Bora is also due to many artists, writers as well as navigators like Alain GERBAULT and Paul Emile VICTOR who decided to spend the rest of their lives on this legendary island.