A path to paradise 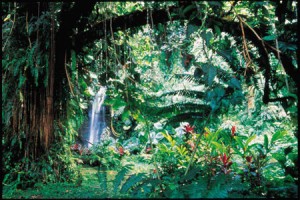 The Vaipahi Gardens located along Tahiti’s south coast in the district of Mataiea 49 kilometers (30 miles) from Papeete are rich in cultural heritage and abundant in natural beauty.

Restored and reopened in August 2007, the gardens include archaeological relics and legendary traditions. Spread out over more than a hectare (2.5 acres) on the montainside of circle island road, they offer ponds, a waterfall and walking paths.

There over 75 different species of vegetation, all kept fresh by water from lake Vaihiria in the center of the island, Tahiti’s only fresh water lake. According to ancient Tahitian legend, the nearby Vaima river once played an important religious role because the spirits of the former Teva tribe considered this waterway as “the path of purification of souls” in their quest to reach paradise.

There are three walks available, each lasting 1/2 hours. One of the walks takes visitors along marked paths next to the river. Along the way are archeological sites steeped in history, as well as shaded areas created by pine trees that adorn the forest, a rather surprising sight on the island of Tahiti. This walk ends at a plateau with overhangings cliffs and a spectacular view of the entire park encompassing the Vaipahi gardens and the varying shades of blue in the lagoon and ocean, framed by the sunny shores of the main island.

Just like the ancient Tahitians, you are approaching paradise.